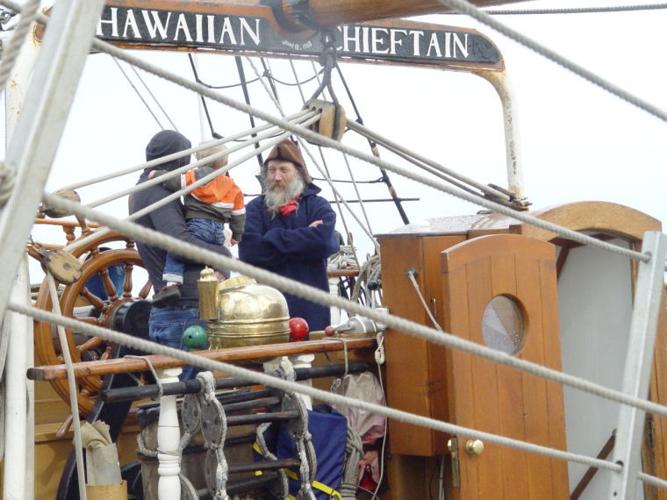 Visitors were treated to an up-close look at the Hawaiian Chieftain and a chat with one of the ship’s crew members during the ship’s recent visit in Antioch. 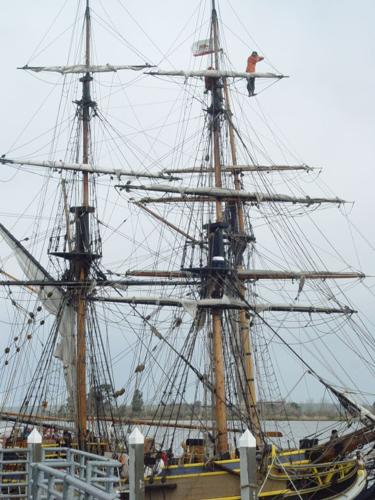 A crew member sits high atop on the rigging of the Hawaiian Chieftain.

Visitors were treated to an up-close look at the Hawaiian Chieftain and a chat with one of the ship’s crew members during the ship’s recent visit in Antioch.

A crew member sits high atop on the rigging of the Hawaiian Chieftain.

A biting wind blew downriver, shivering everybody’s timbers, but the landlubbers persevered and lined up in their hoodies and foul weather gear to tour the brig Lady Washington and topsail ketch Hawaiian Chieftain, moored at the Antioch Marina. The tall ships visit Antioch annually, but this visit last week, was their first joint appearance.

“Grab the black line,” said crew member Ryon Root as visitors – after climbing the slick gangway with rope rails – ascended a ladder to the deck. The slanted, heavy-duty knotted black line was indeed sturdy. Root gave a hand to small children and seniors. Now, the adventurers were aboard the Lady Washington, which was joined alongside the Hawaiian Chieftain.

Built in 1989, the two ships are replicas of tall ships that sailed the seas in the 1700s. Made of wood for authenticity, the furled sails and coiled lines are in exact loops and secured next to the railings with belaying pins. Two crew members worked high in the rigging, seemingly oblivious to the bitter wind. Visitors on the decks below, shielding themselves with coats and hats, got a taste of what life aboard a ship must have been like.

“I love these hidden gems,” said Andrea Belladroma, who was there with her husband and children.

A crew member dressed in the hat and coat of the 1700s was there to answer any questions. As expected, kids didn’t seem affected by the weather and ran from the helm to the sides, all around the deck, from bowsprit to stern, shouting and asking questions. A small cannon sat on the deck near the railing.

Gray curtains of clouds surrounded the scene; the sun struggling to break through. The visitors were determined to see everything no matter the weather. The ships’ bowsprits were aimed right at the wind as if daring the weather to ruin their day.

The two ships are owned and operated by the Gray’s Harbor (Washington) Historical Port Authority, which offers walk-on tours and hands-on programs where would-be sailors learn the basics of knots, sail theory, traditional and modern ship maintenance and maritime history.

On this particular day, overhead, against a leaden sky, three masts soared, holding eight cross spars and one spar slanted up at a 45-degree angle. The aforementioned heavy black lines rose, connecting to a maze of lighter lines.

Later in the day, visitors had a chance to help raise a sail, learn a sea chant and take the helm – weather permitting. Some visitors paid extra to be on the two ships as they got underway for the Battle Sail, featuring real cannon fire with real gunpowder, but no cannon balls. Passengers were encouraged to make verbal taunts at the other ship.

At six bells, or 1100 hours, the sun pulled the gray curtain back and blue skies were promised. The line of visitors grew longer for a feel of what was. The two ships will sail into Antioch again next year.

Should the City of Brentwood mandate that residents use less water?