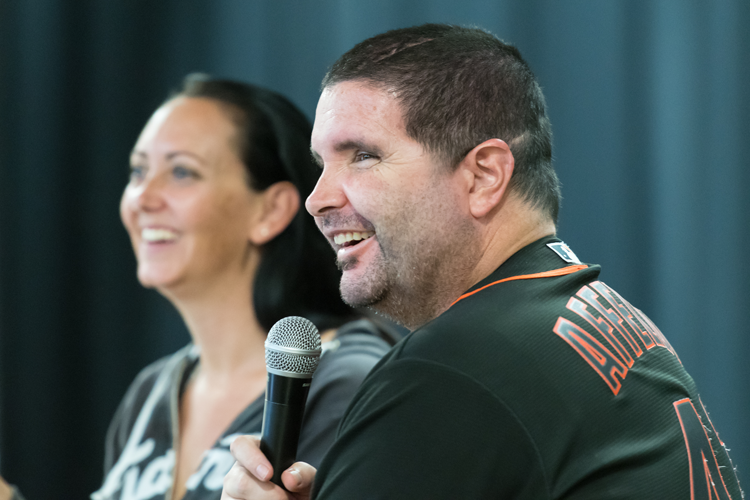 Bryan Stow, the Giants fan who was brutally beaten by Dodgers fans at a game in 2011, spoke with students at Delta Vista Middle School last week about bullying. Photo by Tony Kukulich. 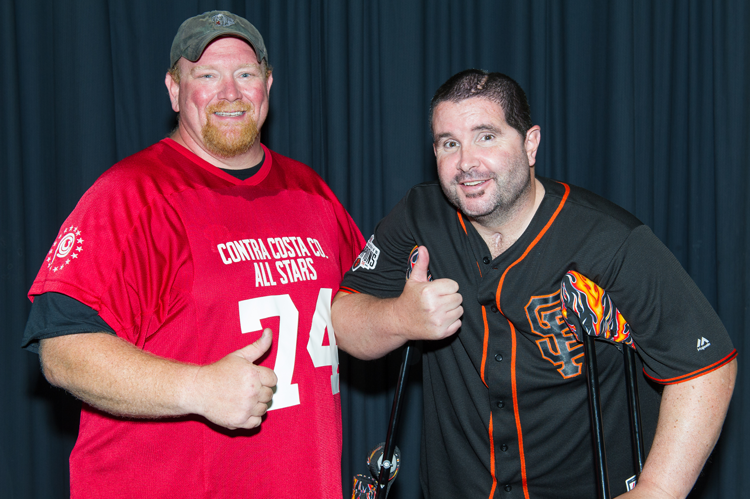 Bryan Stow, the Giants fan who was brutally beaten by Dodgers fans at a game in 2011, spoke with students at Delta Vista Middle School last week about bullying. Photo by Tony Kukulich.

It’s been five years since Bryan Stow nearly lost his life during a violent attack in the parking lot of Dodger stadium in 2011, following a Giants and Dodgers game.

The 47-year-old former paramedic, whose only apparent crime was wearing a Giants jersey, was pushed from behind by two Dodger fans, stumbled and slammed his head onto the concrete. The two men, who were eventually charged in the incident, went on to pummel Stow into unconsciousness.

Suffering a severe brain injury, Stow remained in a coma and on life support for nine months; his prognosis grim. Media coverage at the time was intense, and there were few people in the country who had not heard about the brutal beating or could not recognize the Giants fan’s now-famous face.

Last week, that famous face brought a message of compassion, hope and courage to Delta Vista Middle School students. His scars are still visible, his speech a bit slow and he walks with the aid of crutches, but there is still plenty of sparkle, spirit and humor in Stow’s bright brown eyes.

“We need to put an end to fan violence, right?” Stow asked the rapt audience, who gave him a superstar welcome with cheers and applause. “My life after this brain injury has not been easy – I take 24.5 pills a day, and I will need caregivers for the rest of my life. But, I can still do the things I love in life, and I can still work to save lives.”

The focus of Stow’s speech was on bullying – how to spot it and how to react.

More students, and a few adults in the audience, reluctantly raised their hands.

“Fan violence is adult bullying, and we need to put an end to it; we need to learn to leave it on the field,” he said.

Since the beating, the Capitola resident and father of two has been living with his parents and has continued to make slow, yet steady progress. When he talks about goals, he jokingly refers to a recent milestone, riding in the front seat of the family van.

“I was like groceries bouncing around in the backseat of the van, but now I’m calling the shots in the front seat,” he said with a laugh, adding that his future goals are driving and walking without crutches.

Other milestones have also included the development of the Bryan Stow Foundation, a nonprofit organization dedicated to combating bullying and educating students through empowerment and kindness. Stow’s goal is to reach out to as many schools as possible, and Delta Vista was No. 50.

In fact, the foundation is how Barry Rosenbaum, a member of the Delta Vista PTA, found out about Stow’s speaking engagements and worked to bring him to Oakley.

“Barry did an amazing job of getting it all organized and really handled it from start to finish,” said Delta Vista Principal Harvey Yurkovich. The community also came out to support Stow’s visit, putting his family up in a local hotel and providing donated dinners and lunches from the Boardwalk Grill in Discovery Bay and Round Table Pizza in Oakley.

For those closest to Stow, the transformation in his spirit and purpose has been inspirational.

“In the beginning, he talked about getting better so he could get back to work (as a paramedic),” said Stow’s mother, Ann. “But, since he started doing this, he hasn’t mentioned going back to work. This is how he is helping others now.”

The two men responsible for the beating were sentenced to eight years and four years respectively, but with time in custody credited toward their sentences, jail time for both men was severely reduced. The Stow family sued the Dodgers organization and were awarded $18 million dollars. However, with insurance costs, attorney fees and the fact that the two men were responsible for $4 million of the judgment, which the family is unlikely to see, the Stow’s have hardly received a windfall, given that the lifetime cost of care for Stow could be as high as $30 million.

In any case, for the family that has suffered through the horror of their son and brother’s pain, money is not high on the priority list. What is first and foremost is her son’s recovery, according to Ann.

“It’s been an amazing journey,” she said. “It has taken three and a half years to get to this point, and when I look back, I can’t believe how far he has come. He’s still in there, he’s still my baby; still my boy.”