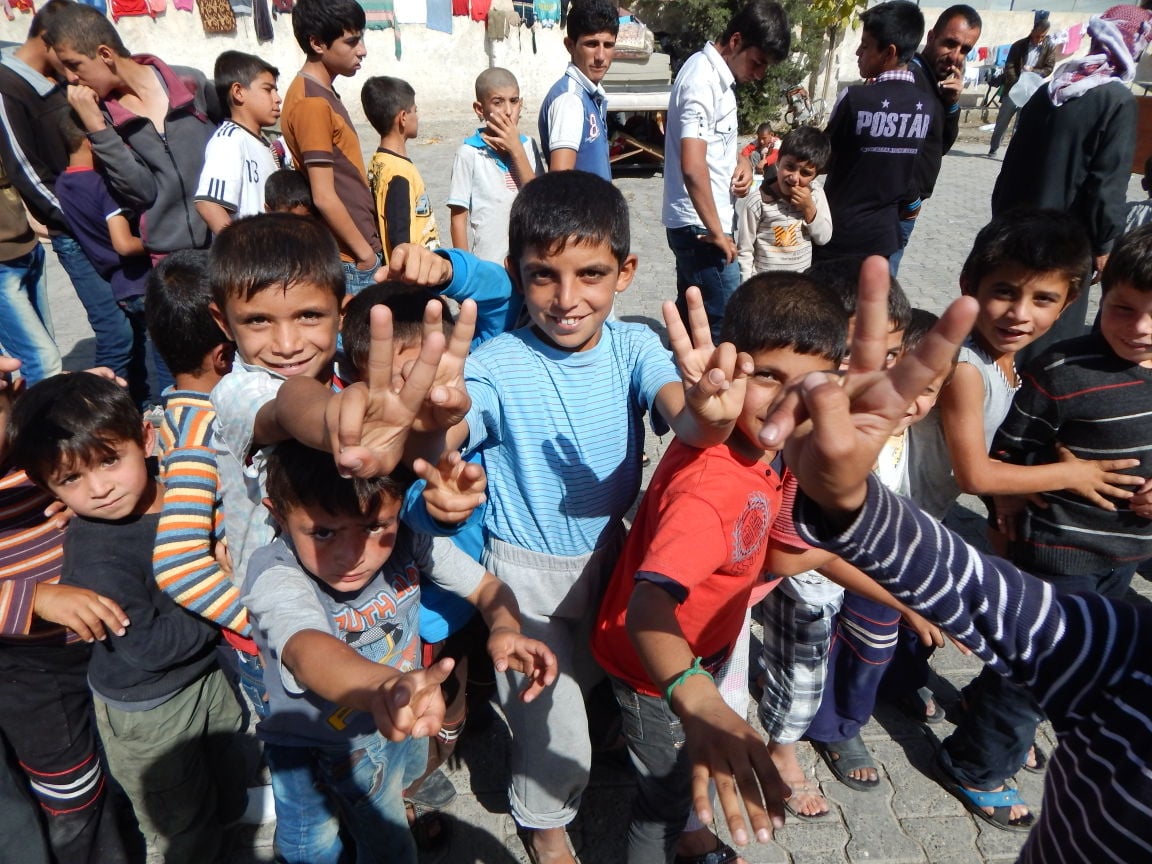 Children at a refugee camp in Suruc, a Turkish village that borders Kobani, find time to play and be kids despite the turmoil. The ‘V’ sign is a symbol for the YPG, the Kurdish militia. 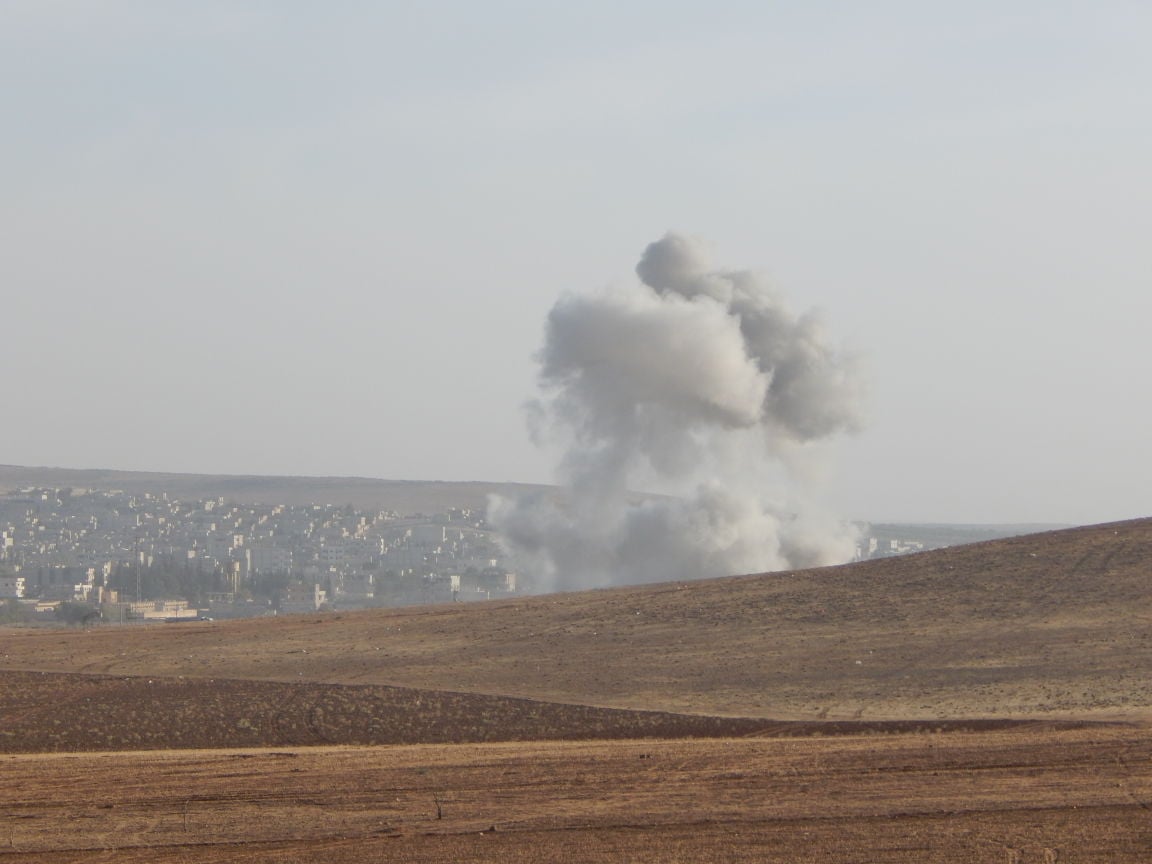 Smoke billows in the aftermath of an American air strike on the outskirts of Kobani, following a bomb that hit an IS position after they attempted to advance into the city.

Children at a refugee camp in Suruc, a Turkish village that borders Kobani, find time to play and be kids despite the turmoil. The ‘V’ sign is a symbol for the YPG, the Kurdish militia.

Smoke billows in the aftermath of an American air strike on the outskirts of Kobani, following a bomb that hit an IS position after they attempted to advance into the city.

Press correspondent Corey Hunt is on a six-week journey to the Turkey-Syria border just outside the flashpoint city of Kobani, which is locked in a struggle between Syrian Kurds and the Islamic State. Here, he shares some of his personal story and experiences at the front.

More than three weeks after American warplanes descended upon the battlefront in Syria’s civil war, Islamic State (IS) militants are still continuing their relentless march across the country’s northern frontier, leaving a trail of carnage and abuse detailed over and over again by those lucky enough to escape. Not everyone is willing to submit quietly - something the IS leadership is finding out the hard way - as residents of a stubborn city continue to fight back.

Situated on the border of Turkey, Kobani is an agricultural community where most of the population is ethnically Kurdish. The town faces a struggle on its own, in a nation that once prided itself on Arab nationalism under the rule of President Bashar al-Assad, the dictator who brutally cracked down on dissent and denied citizenship to many Kurds for decades. Those days may be behind them after Assad’s hold over much of the north collapsed in the summer of 2012, but Kobani’s residents find themselves under siege from a new foe. Islamic State forces – emboldened after their conquests in neighboring Iraq and victories over moderate rebel forces elsewhere in Syria – are making steady gains in surrounding villages, cutting off supply routes and depriving the city of any access to the Euphrates River.

“The IS killed my brother,” said Darwish, a resident who was forced to flee to Turkey after IS began its assault on Kobani. “We were asleep…and they entered our house. We did nothing wrong, but they took my brother and beheaded him.” He added that he and his remaining family members are grateful for the American air strikes and hope they will continue until IS is completely destroyed.

On the ground, the defense of Kobani rests with the people’s protection units, known more specifically by their Kurdish acronym, YPG. Their ideology and vision for the Middle East and a post-Assad Syria contrasts deeply with that of IS in a number of ways. Perhaps the most striking of all is the large number of female combatants who join their ranks and fight alongside the men, including Narin Afrin, a top commander. With IS artillery now pounding the city center and nearly 200,000 terrified civilians sent fleeing over the border, she and her comrades are determined to hold their ground and fight until the end.

“The situation is very bad…the IS are killing children, women, they are targeting everyone,” said Shamsa Al-Ali, one of the refugees who, like Darwish, had recently crossed into Turkey. “We pray that the YPG can achieve a victory and win.”

American air power has been aiding the YPG as they try to repel the IS invasion, but Kurdish fighters insist they need better weapons to counter the sophisticated arsenal their opponents looted from captured Iraqi and Syrian Army bases – an arsenal that includes American-made tanks and Humvees. YPG supporters are also expressing outrage at Turkey, a country which fought a civil war with its own Kurdish population, due to a perception that the Islamist-leaning government there prefers an IS victory in Kobani and is tacitly aiding the invasion. The tensions are severe enough to test the peace process in Turkey, where dozens of people were killed earlier this month in protests.

In keeping with their cheerful culture, spirits remain high among Syria’s Kurds, from the fighters on the street to the refugee children playing in the camp. Whether or not that will be enough to dampen IS hopes of consolidating the border, however, remains to be seen. The days ahead will be crucial for whatever outcome of the nearly four-year old civil war.