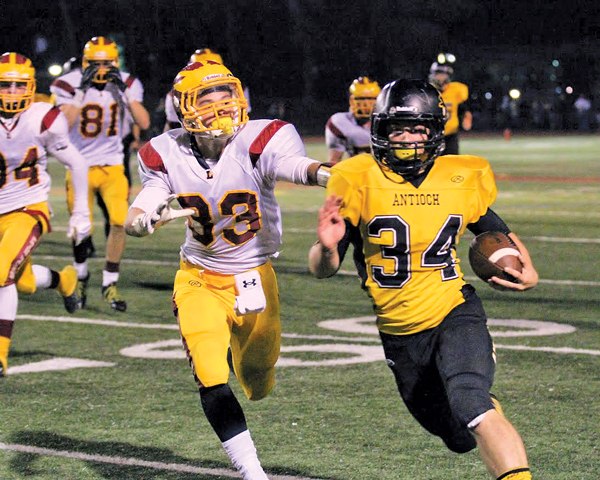 Antioch running back and linebacker Nick Perry will complement star Najee Harris on offense this season, while also contributing on defense.

As football fans check out the new Antioch High School football stadium this season, they might also want to keep an eye on the action on the field.

Coming off a 7-5 record last season, which included the team’s first North Coast Section playoff win (over San Leandro) since 1984, the Panthers appear ready to make more noise this season. Five-star junior running back Najee Harris, the top-ranked player at his position in the 2017 class, returns with talent around him on both sides of the ball, meaning Antioch figures to be in the thick of the BVAL title race.

Key Returners: The Panthers are expected to return at least 25 players from last year’s squad, which went 7-5 and 2-3 in league play. Harris, who rushed for 2,263 yards and 23 touchdowns in a breathtaking season, will be joined by 2014 all-league second team back Nick Perry in a talented backfield. Returning junior quarterback Abram Karnthong, who split time with Harrison Ong last season, figures to take over the starting role full-time this year. Karnthong completed 11 of 23 passes, for 98 yards, in 2014. Senior Ryan Payne, the team’s second leading receiver last season with 172 yards, will join with Keonte Taylor, a transfer from James Logan, as the team’s top two receiving threats. Wide receiver and defensive back Jamar Wilson, who played both positions last season, is also slated to return.

Game to Watch:  Sept. 11 vs. San Leandro. The Panthers took a bite out of the Pirates in the first round of the North Coast Section playoffs last season. The rematch figures to be hotly contested, and comes a week after the Panthers play a quality opponent in Milpitas. Of course, Panthers fans also have their eyes set on rivalry matchups against Deer Valley, on Oct. 30, and Pittsburg on Nov. 7.

Outlook: The explosiveness of Harris means the Panthers can never be counted out of any contest this season. The Panthers will need to replace key pieces lost to graduation, however, including all-league offensive linemen Jonathan Gaytan and Michael Fonteno, along with key defensive pieces in defensive lineman Michael Gray, linebacker Iosefa Papalagi and defensive back Tay Thompson. Gray, Thompson and Papalagi were selected for the all-league second team last year. The Panthers will face some quality opponents in nonleague play, including Milpitas, San Leandro and Rancho Cotate. Milpitas won the consolation final of the Open Division of the Central Coast Section playoffs last year, while Rancho Cotate reached the NCS Division III semifinals. San Leandro was bounced by the Panthers in the opening round of the NCS Division I playoffs. The Panthers will also play Northgate, Acalanes, and Pinole Valley in non-league play. The quality of opponents prior to the weekly clashes with BVAL opponents means the Panthers will be battle-tested heading into the heart of their schedule, and figure to be a factor in the race for a league title.

A & B Landscape Design & Maintenance