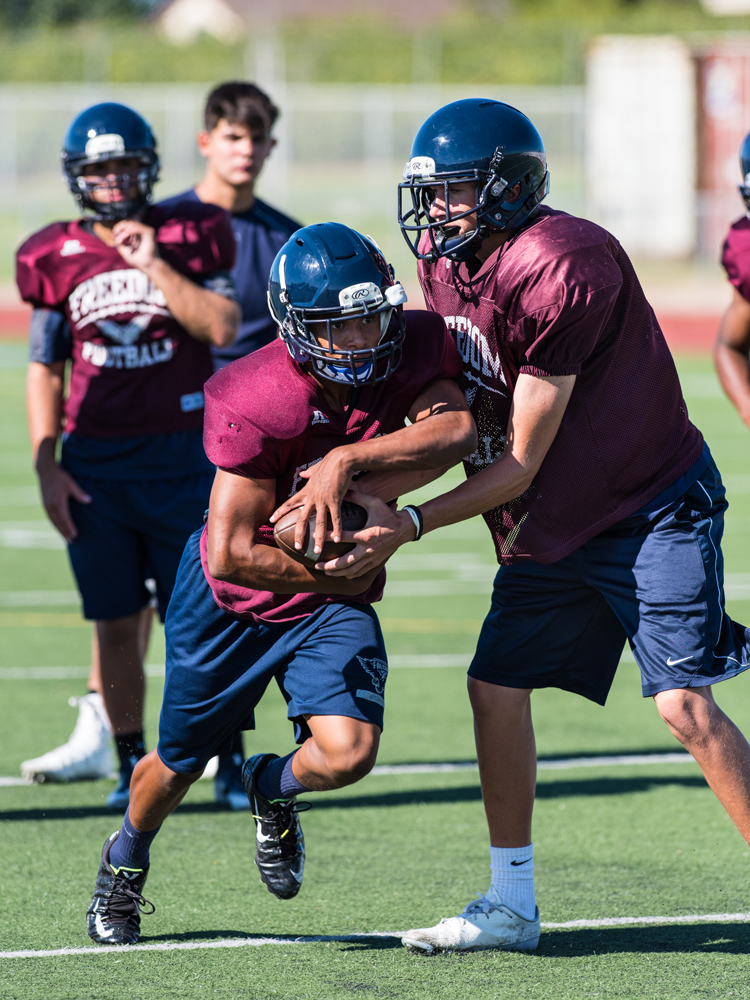 Running back Elijah Jackson receives a handoff during the Falcons practice last week. The Falcons are seeking their sixth straight playoff appearance. Photo by Tony Kukulich. 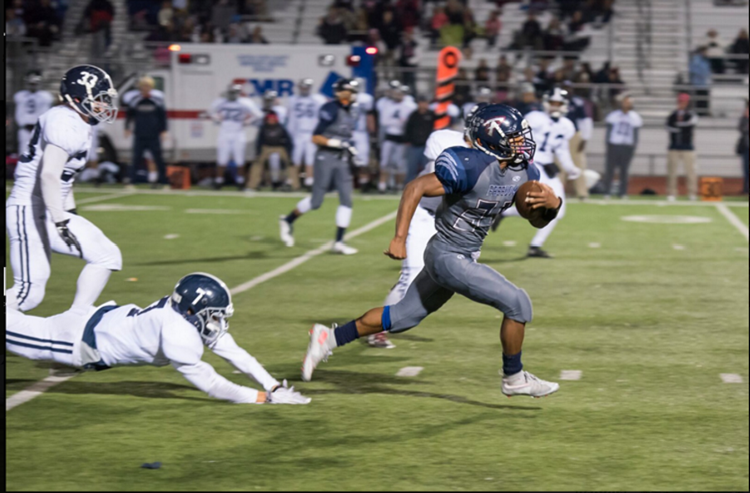 Freedom running back Ronnie Rivers figures to be one of the Falcons most explosive players this season. Press file photo.

Running back Elijah Jackson receives a handoff during the Falcons practice last week. The Falcons are seeking their sixth straight playoff appearance. Photo by Tony Kukulich.

Freedom running back Ronnie Rivers figures to be one of the Falcons most explosive players this season. Press file photo.

Under the guidance of 14-year head coach Kevin Hartwig, the Freedom Falcons will look to make a sixth consecutive appearance in the North Coast Section playoffs.

After a heartbreaking loss to Pittsburg and a hard fought defeat at the hands of Antioch, Freedom found itself at 0-2 in Bay Valley Athletic League play and 3-4 overall. The Falcons responded by winning their final three regular season games by a combined 139-50, reclaiming the Bell from rival Liberty in a 51-8 victory. Freedom then routed Dublin 37-12 in the first round of the North Coast Section playoffs. The season then ended in the second round with a 45-14 defeat to Foothill.

The team is upbeat about the progress that it has made in early practices.

“We’ve had a great summer,” Hartwig said. “We’re excited for the year.”

Returning players: Freedom’s defense will enter the season with a lot of experience. Linebackers Kyle Harmon and Kevin Longeran are both three-year starters with the Falcons. Each player will also see time in the Freedom backfield.

Ronnie Rivers is also a three-year starter and was one of the league’s best players last year. As a junior, Rivers ran for nearly 1,600 yards and 23 touchdowns. He added nearly 300 receiving yards and four touchdowns.

Junior Baylei Coston looks to have an even bigger role in the passing game. As a sophomore, Coston was second on the team in receiving yards.

Senior safety Cory Cox is another key returner. As a junior, he led the team with three interceptions.

New players: One place where Freedom isn’t experienced is at the quarterback position. Senior Dominic Mather will be replacing three-year starter Joe Sweeney. Mather, however, is not inexperienced with the offense or with the varsity level. He kicked for the Falcons last year while backing up Sweeney.

Mather will be working with senior center Jordan Montoya. Like Mather, Montoya was on the varsity squad last year, but figures to have a bigger role.

Hartwig will also rely heavily on senior defensive lineman Andrew Perez, whose role with the team will also be increased.

Outlook: There’s reason to be optimistic at Freedom. Antioch and Pittsburg were the BVAL’s two best teams in 2015, but with the exceptions of each other, the toughest league games for the Panthers and Pirates came against the Falcons. Those two are the favorites entering the season, but Freedom is the team most capable of breaking up their dominance.

Optimism for the Falcons isn’t limited to just last season’s results. Despite dealing with new challenges, they’ve also had a strong summer.

“Even without helmets and all these new, funky practice rules, we’ve improved drastically since June,” Hartwig said. “We’re really excited about our progress and where we’re going.”

Hartwig identifies the season opener against Turlock as a key game for the squad.

“Every game is pivotal,” the coach said. “The league is always tough and we have a non-league schedule with nothing but playoff teams, but week one coming out of the gate is always a big one because it sets the tone.”

Based on last season’s results, the future is bright for Freedom.