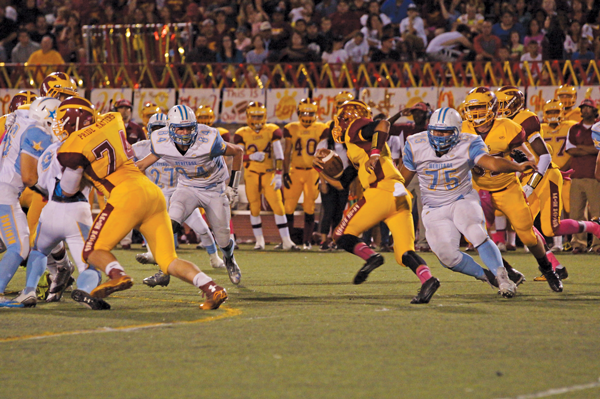 After failing to make the playoffs in 2012 and 2013, Heritage High School returned to the postseason in 2014, marking the sixth time in eight years of varsity football that the Patriots advanced beyond the regular season.

Even more impressive in 2014 was the strength of schedule against which Heritage battled to reach the playoffs. All six teams that beat the Patriots won at least one playoff game, and three of them reached their respective section title games. Along the way, Heritage also reclaimed the Brentwood Bowl against rival Liberty High School, winning 15-12 on enemy turf.

The win over Liberty was one of two victories for the Patriots against playoff-bound teams last season, and Heritage enjoyed some individual accolades as well. Senior quarterback Sohail Mohsini set single-season school records for passing yards and touchdowns, while receiver Tre Edwards set single-season records for receiving yards, receptions and touchdowns. In addition, defensive lineman David Letuligasenoa was named first-team all-league for the second straight year.

“Getting back (to the playoffs) was a big accomplishment for us last year,” said Head Coach Don Sanders, who will be entering his third season at the helm in 2015.“It was a big turnaround and enables us to set higher goals going forward.”

Key Returners: Every offensive coordinator will likely keep one big name in mind when preparing for the Patriots this season, and that is Letuligasenoa, who is entering his third year starting on the varsity level. Schools across the Big Sky conference, along with FBS programs such as Missouri and Colorado, have shown a strong interest in the dominant force on the defensive line.

Letuligasenoa is joined on the defensive line by senior Jacob Snyder, and will also see time offensively this season with fellow returners James Wilson and Adam Morris. Bolstering the Patriots’ front seven defensively is the return of linebacker Josiah Cerda and defensive back Isiah Clement.

With three returners on the offensive line, Heritage hopes to make room for returning playmakers at the skill positions, including utility player Ezra Magalei. Magalei had arguably the biggest single play of the season last year, hauling in the game-winning touchdown catch against Liberty. Tyrese and Tyriq Mack, who return as juniors after making an impact at the varsity level as sophomores in 2014, join him.

Another returner who had limited time last season, but could be primed for a breakout year, is running back Ryan Sanchez. Sanchez backed up all-league fullback Leeandre White last year and figures to be the Patriots’ workhorse between the tackles. With all the returners offensively, the pieces seem to be in place for Heritage to take another step forward.

“Offensively, we’re ahead of where we were last year in terms of technical execution,” said Sanders. “It will be interesting to see how that translates when we really start full contact and get into games.”

Key Newcomers: With so many pieces of the puzzle back from last season, the Patriots are also excited about two newcomers to the varsity level.  Sophomore Aidan Quinn and senior Spencer Rohrer were playoff call-ups in 2014 and are both expected to make an impact this season.

Quinn is currently figuring into the Patriots’ rotation at the slot and wing, along with Magalei and Tyriq Mack, while Rohrer is one of the team’s top options at receiver, along with Tyrese Mack and Clement.

Rohrer displayed his speed in the spring as an individual qualifier for the section championships in the 100 meters, and a Meet of Champions qualifier as a member of the Patriots’ 400-meter relay team.

Game to Watch:  The Brentwood Bowl is always a huge game in terms of rivalry, spirit and bragging rights, and the Patriots currently hold a 7-1 advantage over rival Liberty in the all-time series.  After allowing more than 50 points to Antioch last season, the Heritage defense will no doubt be geared up for a rematch with Najee Harris and company.

A late-season game to keep in mind will be the annual final game with nearby Deer Valley. In many years, that game has decided playoff eligibility or potential seeding, and with the expected improvement of the Wolverines, 2015 could be no different. A nonleague game with potential playoff implications down the road could be a trip to Amador Valley in the first-ever meeting between the schools.

Outlook: Heritage replaced their two nonleague losses to Campolindo and Marin Catholic with games against Acalanes and Amador Valley, and these could be deciding factors in the overall record for the Patriots in 2015. Pacheco, College Park and Berkeley are all back on the schedule after falling to Heritage last season, so the Patriots certainly have an opportunity to build some momentum heading into league play, which promises to be difficult on a weekly basis.

“The league as a whole will be very competitive this year,” said Sanders. “I would expect our league to be on par with the (East Bay Athletic League) this season.”

Much Ado About Nothing - Play at Heritage High School

A Place of Learning Fundraiser

AFSP Oakley Out of the Darkness Community Walk

How do you feel about the FBI and Contra Costa County’s joint investigation of the Antioch Police Department?