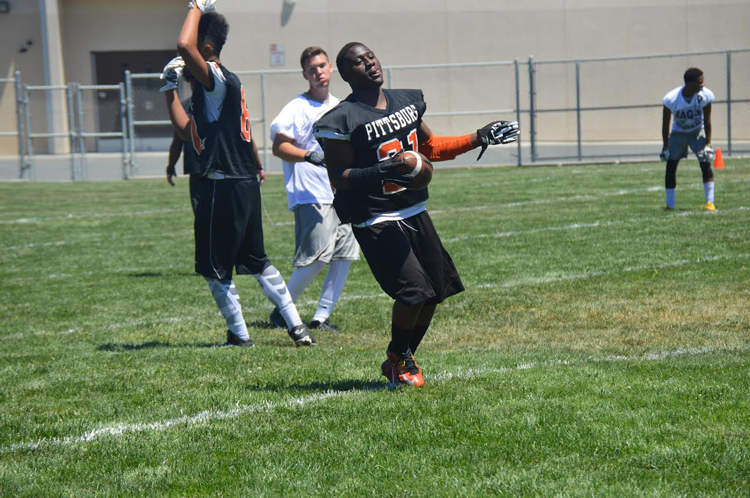 Despite a young nucleus in 2015, Pittsburg found itself in a familiar position entering the Big Little Game against Antioch to finish the season.

In an electric atmosphere, the Pirates were leading 28-14 at the half, two quarters away from capturing their third straight Bay Valley Athletic League title. However, it didn’t happen that way, as the Panthers roared back for a thrilling 44-42 victory.

As such, Pittsburg enters this season with experience, another influx of young talent and a desire to return to the top of the league.

Returning players: Despite a strong cast of returners at the skill positions, there is no doubt this year could be special along both lines for the Pirates, thanks to a deep and talented class of veterans with plenty of varsity experience.

“This will be the deepest line I have ever had, and it could be the best,” said Pittsburg coach Vic Galli, who is entering his 15th season at the helm, and broke the Pirates record for all-time coaching victories last year. “Our front four defensively all started last season, so we are pretty excited about that group.”

The defensive line is deep with experience and talent, led by last year’s sack leader, Iffy Joyner, who is receiving strong interest from track and field programs such as Cal and Miami after establishing himself as one of the top discus throwers in the state. Tariq Wright and Jason Harmon once again solidify the interior of the defensive line, while junior Michael Pryor and senior Floyd Burrell each add speed off the edge.

The linebacker corps and secondary took some hits to graduation, but return a handful of experience to go with young talent. Mason Collins started at linebacker in 2015, registering 35 tackles and three tackles for a loss. Armon McRaven saw time both in the secondary and outside linebacker last season.

Senior Sam Dickson and junior A’jae Boyd return with experience on both sides of the ball.  Dickson played primarily on the defensive side in the secondary, while Boyd was one of the top sophomores in Northern California last season, leading the team with 50 catches on offense, while also making 39 stops in the secondary.

The running game should benefit from experience both up front and in the backfield. Senior Montaz Thompson recorded the third-highest regular-season rushing total in Pittsburg history last season, and gets to run behind a veteran offensive line, with three returning starters from last year.  Sergio Vargas, Devon Taylor and DJ Wright all started last season, and Harmon can certainly help on that side of the ball as well. Junior Chris Nelson also saw varsity playing time in 2015, while 6-foot-6-inch, 260-pound senior Jacob Avilla figures to be an imposing force.

The quarterback position is a battle right now entering official practice, but senior Seu Kuka is the one player with varsity experience, having thrown a pair of touchdown passes while backing up Christian Young last season.

“Seu has gotten so much better over the last year, but it is still a very close competition,” said Galli, referring to the battle between Kuka and sophomores Trey Turner and Willie Harts. “All three are very capable, and all are very good athletes who will contribute to the team somewhere on the field. We need to narrow it down soon.”

New players: Wide receiver, defensive back and linebacker are the three positions that could see the largest impact from new players, along with the potential for an underclass starting quarterback.

Sophomore linebacker Jack Lacy III is a leader among this contingent, as a likely starter at linebacker. Lacy also proved he can play both sides of the ball on the Pirates’ unbeaten freshmen team last year, running for 13 touchdowns.

“We’re pretty young and new at linebacker, but we’re also going to be talented and deep,” Galli said.

Two more of those newcomers at linebacker include junior David Martija and Timote Finau, a 6-foot-1-inch, 185-pound athlete who brings range to the position.

Three players who figure at either wide receiver or defensive back include juniors Donovan Crosse, Jalen Mitchell and Justin Sanders. Galli expects Crosse to play in the slot offensively, and describes him as a player with big potential, while Sanders was a playoff call-up in the secondary last season, and Mitchell has the ability to contribute on both sides.

And even though the Pirates are already deep on both lines, watch out for two more young players on the varsity this year. Sophomore Jacob Bandes could be a two-way starter and one of the best players up front in the program, while fellow sophomore Jaden Tauanu’u could see extensive time on both sides of the ball. Tauanu’u already has an offer from Utah State, can play receiver on the offensive side of the ball – possibly tight end in the future – and can play either defensive end or outside linebacker on the defensive side.

Outlook: Not since 1999 has Pittsburg gone back-to-back seasons without capturing the BVAL title.  Antioch denied the Pirates a three-peat last season, but the team is hungry to extend that former streak.  In Galli’s 14 seasons in charge of the program, the Pirates have won 10 league titles, and look to capture an 11th title in 2016.

The non-league schedule is tough as always, including Central Coast Section powerhouses Serra and Archbishop Mitty, but it is all with an eye on the bigger prize – a shot at the league title and a berth in the new North Coast Section Open division for the playoffs.

“Our league is strong right now,” Galli said. “The motivation to compete against the teams in our league and in our section has shown in the weight room this off season and in all our workouts to this point.”

925 Band and the WiseGirls, Presents Music at the Mansion

A & B Landscape Design & Maintenance