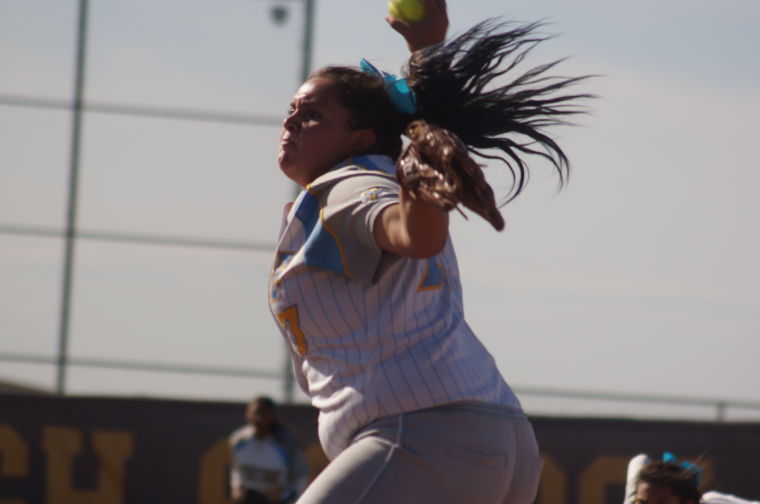 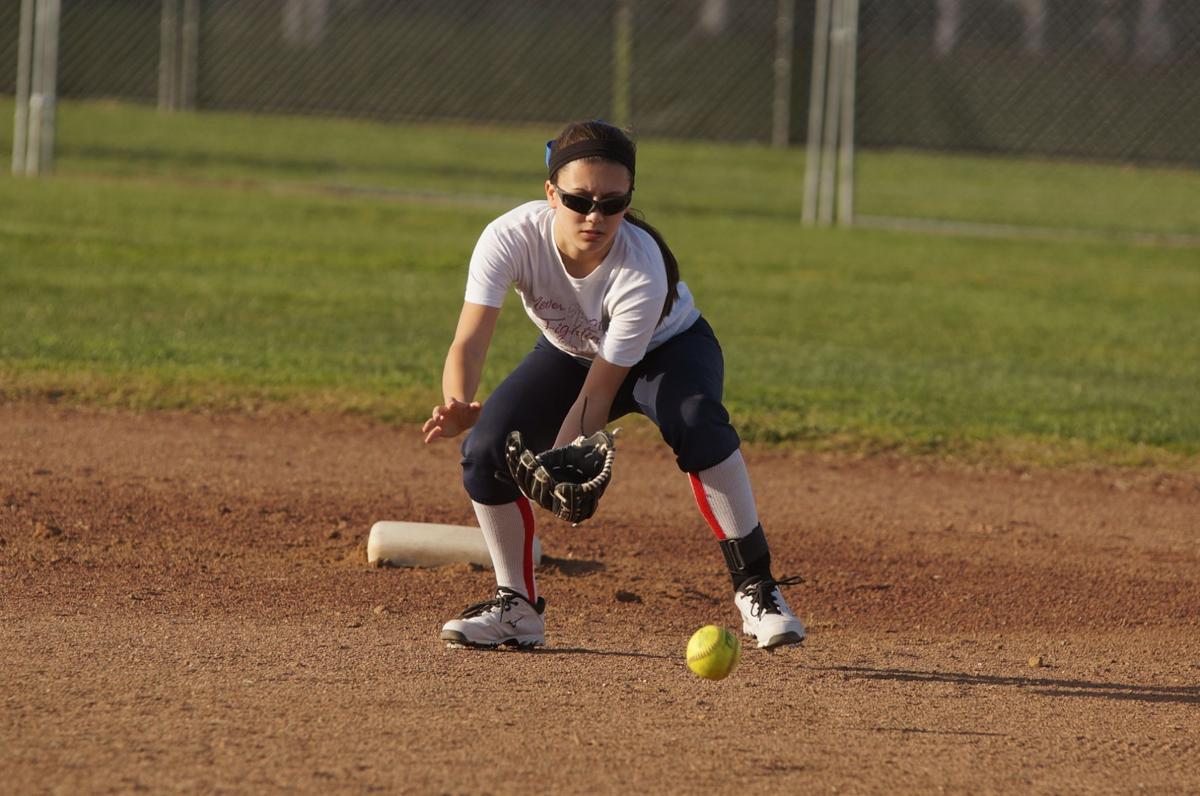 Liberty sophomore Jaedynn McNair takes a ground ball during a recent practice. She’ll be part of the squad that hopes to knock off Heritage atop the league standing this season. 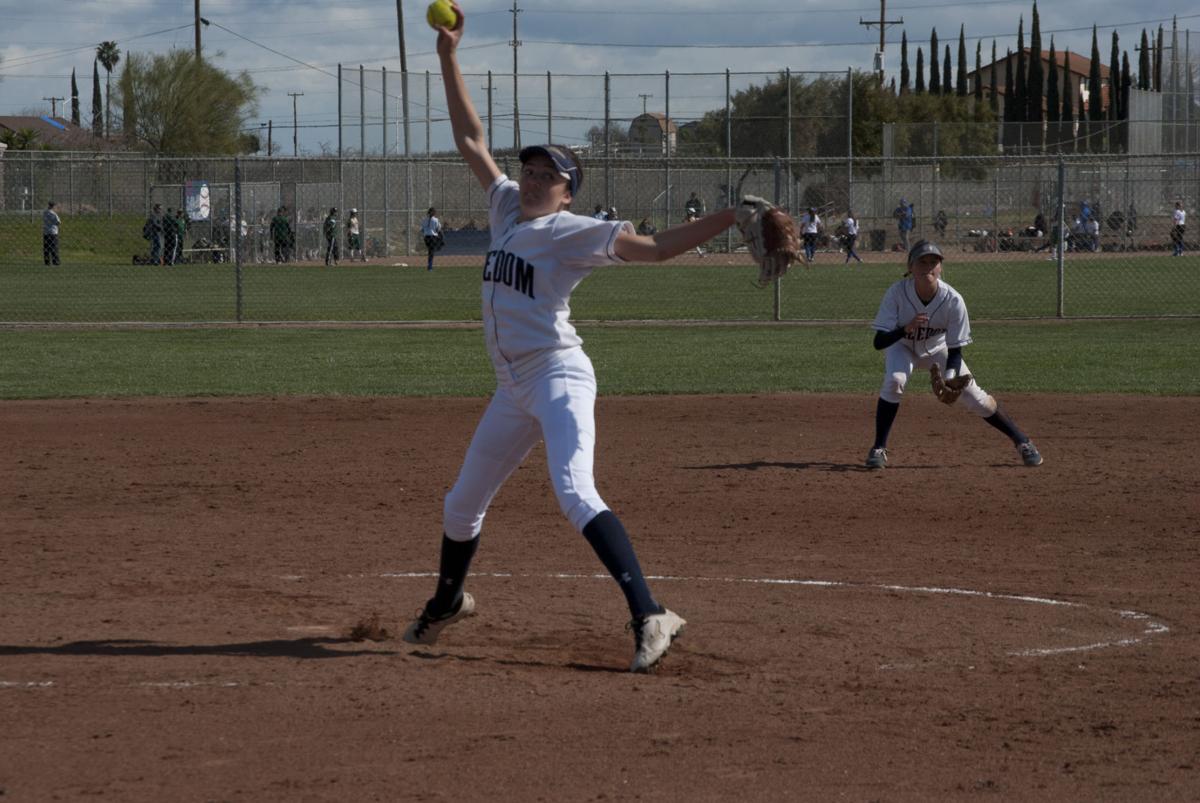 Freedom freshman Kalissa Heihn is expected to be one of the Falcons’ top pitchers this season. 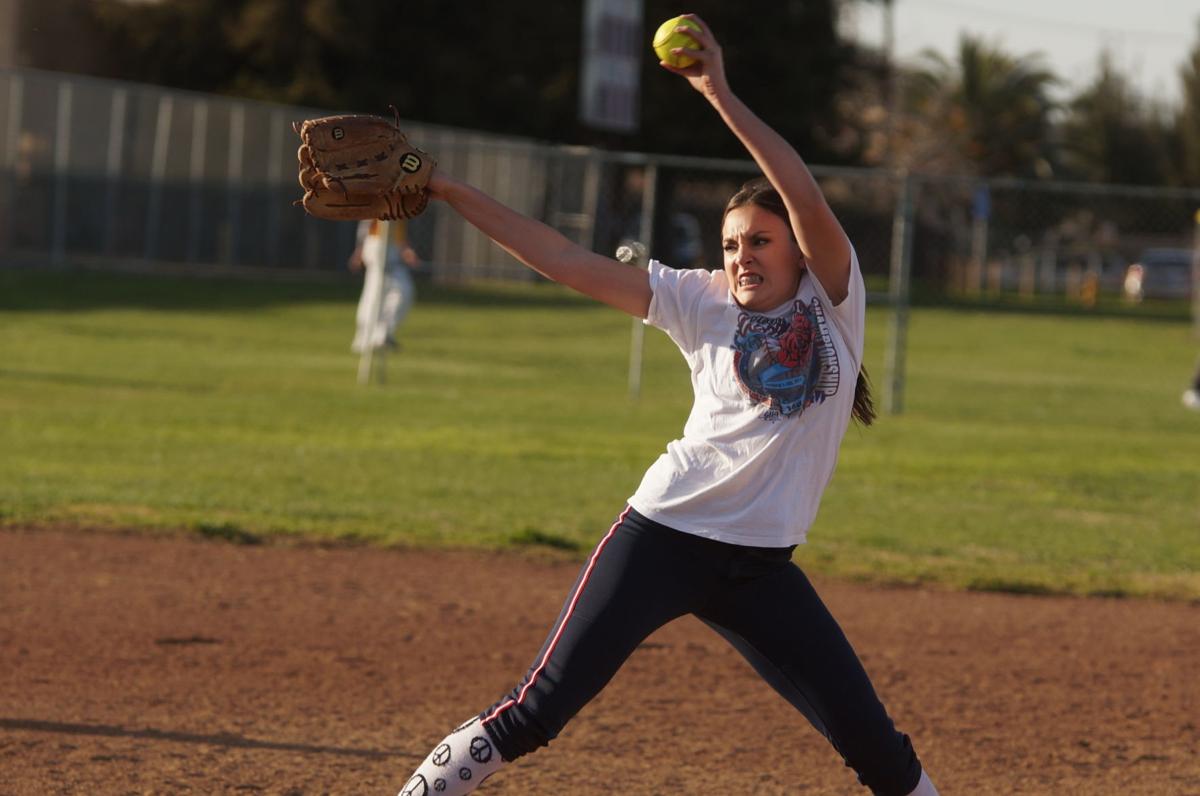 Liberty pitcher Ashlyn Frits winds up for a pitch during a recent practice. She’s expected to be one of the Lions’ top pitchers this season.

Liberty sophomore Jaedynn McNair takes a ground ball during a recent practice. She’ll be part of the squad that hopes to knock off Heritage atop the league standing this season.

Freedom freshman Kalissa Heihn is expected to be one of the Falcons’ top pitchers this season.

Liberty pitcher Ashlyn Frits winds up for a pitch during a recent practice. She’s expected to be one of the Lions’ top pitchers this season.

A year after finishing 10-0 in Bay Valley Athletic League (BVAL) play en route to a league title, the Heritage High softball team enters the season poised for a repeat.

Not to be outdone, the Patriots’ stellar pitchers Morgan Billeci and Marissa Espinoza, both sophomores, return one year stronger after the duo helped the team finish 19-5 last season and reach the second round of the North Coast Section playoffs.

Espinoza figures to be a menace on the mound again this year. She had 12 wins last season and finished with a 1.62 ERA in 86 innings pitched.

“We got some hitting and pitching, but we have to work on that defense,” said Heritage Head Coach Ron Rivers “We got to make the plays we are supposed to make.”

“I am excited to see how we’ll do as a league and as a team,” Rivers said.

With no seniors on the roster, the Freedom softball team enters the season as a young squad, but one that is ready to vault to the top of the BVAL.

Infielder Adrienne Davenport and utility player Marissa Gasca, both all-league players a year ago, figure to lead the squad that finished second in the BVAL last season with a record of 14-8-2 and was eliminated by Castro Valley in the first round of the North Coast Section (NCS) playoffs.

The Falcons will be tested early by strong competition in both the Livermore Stampede and Queen of the Mountain tournaments, which should prepare them for a challenging league schedule.

“We are working hard,” Russo said. “The tempo at practice has been really good. We just have to come together as one team and we should be good.”

Coming off a season that saw the Lions reach the NCS playoffs after finishing third in league play behind Freedom and Heritage, Head Coach Stacie Del Chiaro believes the team is primed for another successful season.

“I feel really comfortable with my team this year and feel it’s going to be a great season for us,” Del Chiaro said.

Infielder Michaela Foisy, slugger Kortney Jones and outfielder and second baseman Jessica Jones, who were all-league players last season, return to a squad that finished 9-15 and were bounced by Santa Rosa in the first round of the playoffs.

Another newcomer, freshman catcher Emily Muniz, will be behind the plate but is already showing signs of being a leader.

“She is going to be a valuable asset to this team,” Del Chiaro said. “She has a great attitude, work ethic and passion for the game.”

Sophomore infielder and outfielder Alexus Coleman is also expected to be a key contributor.

“It’s going to boil down to hitting, pitching and making the plays,” Del Chiaro said.

Entering their first full-year under Head Coach Nick Wisely, the Panthers are trying to build on a respectable finish to last season.

Wisely, who inherited the team in the middle of last season when it was 1-9, helped the team finish 6-18 and 4-6 in league play.

Freshman pitcher Ayanna Sanchez will take over in the circle, but she’s more than capable, Wisely said. So far, she’s shown great character and a willingness to work hard.

“We have some youth in some places and also some veteran leadership, which is nice,” Wisely said.

The coach said he hopes the squad can build on its late-season success last year. He believes that if the team had won its final game against Heritage, it would have reached the postseason.

“We are returning pretty much every position player except the pitcher,” Wisely said. “I think we are shaping up nicely, but playing in the BVAL is kind of like the pre-post season pretty much. It’s like a playoff game every single game.”

The Wolverines, who finished fifth in the BVAL last season with a record of 11-12 and 4-6 will lean on outfielders Abriana Arzaga and Amanda Coley and catcher Jazzlynne Arzaga for both leadership and a little offensive firepower.

As a freshman last season, Jazzlynne burst onto the scene, hitting .349 with 22 hits and 13 RBI. Her efforts earned her a spot on the all-league first team last season.

Coley, a senior, will likely light up the base paths once again for Deer Valley this year. Last season she was only caught stealing twice in 24 attempts.

Sophomore Infielder Gabriela Arzaga is also expected to continue her growth on the field. As a freshman, she appeared in 23 games for the Wolverines and had 12 steals.

Deer Valley was expected to open play on Wednesday at home against West High of Tracy.

First-year Pittsburg Head Coach Brian Horace is such a believer in team play that he declined to state who he thinks will lead the squad this season.

The Pirates, who have had a new coach each of the past four years, finished last in the BVAL last season with a record of 4-16 and 1-9.

Horace did say a quartet of players — Shaylyne and Gianna Siino, Sabrina Perez  and Gisela Solis —  are battling to be the ace of the pitching staff.  Utility player Chanel Lafrades, Shaylyne and Perez, who earned all-league honors last year, will likely be called upon to provide leadership for a team undergoing change.

As the junior varsity coach last season, Horace said more times than not that the varsity team would play well for two or three innings and then implode.

“We are trying to play a different style of ball based on playing team ball.” Horace said. “In the past, we’ve had a lot of strong individuals, but not the strongest team.”

Early on this season, Horace said the team appears to be able to hit the ball, but must improve its defense.

“This team has talent,” he said. “It has just never been able to execute at a high level.”

How do you feel about the start of the school year?